Like many other left-leaning, iPhone-wielding, well-informed individuals of my generation, I signed up for the NYTimes Digital Subscription when it first came out. At first, I used the app all the time and got my full $15 dollars worth. But in the past few months, I have found myself using more curated aggregators such as Pulse and FlipBoard to find out what is going on in the world from a bunch of different viewpoints. Not only that, but the major reason for me not reading it is that the NYTimes iPhone app does not support a certain beta version of iOS that I am not permitted to talk about, but is installed on my phone.

So I decided to cancel my subscription fully. After a “convenient” server error that happened when I tried to cancel online, I gave them a call and 5 minutes later I had an extra $15/mo to spend on coffee. Fast forward to today when I get an email from the New York Times, offering me a %50 rate reduction to come back! $7.50/mo doesn’t sound like a lot saved, but over a year that is $90 so I am going to give them another shot. It won’t work for me right away, but I have to assume that when the new version of iOS comes out that they will update the app right away and I will once again be able to use it.
The email says that the offer is available only to “Times readers like you, who were among the first Digital Subscribers”. I signed up within a week of the announcement, but it is unclear where they are drawing the line. If you signed up right after they flipped the switch, cancel and you could probably save %50 too. 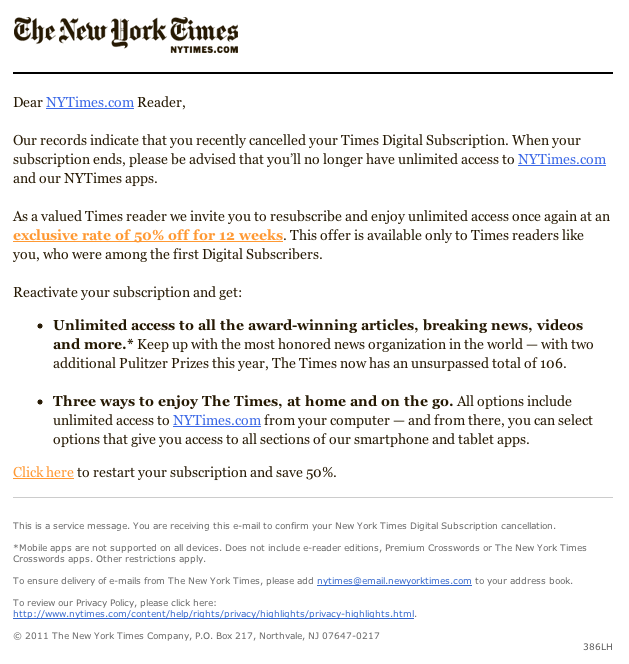