I recently finished a Mac App called Thumbs and I wanted to upload and submit the binary to the Mac App Store through Xcode. Sounds easy enough right? I ran into this error:

Ok. So after (wrongfully) tinkering with the Base SDK and deployment target, ensuring I was on Xcode 4.2.1 (non-beta), I re-read the error and refocused on the OS. I am running Lion 10.7.2, but it turns out I was on the Beta track! Simple fix right? Nope.

Trying to get back to 10.7.2 official didn’t work for me at all. I tried downloading it from the Apple developer site but they redirected me to the Mac App Store. Mac App Store sees that I am already running 10.7.2 and wouldn’t let me download. I found an Update on Apple support pages that claimed I could update to 10.7.2, but nope. I thought about partitioning my hard drive and installing fresh, but that would mean that I had to deal with exporting importing my keys, development environment and profiles. Ugh. I decided to hit the twitterverse and a few minutes later, I got a reply from @christian_beer:

Ooooh, a hack. Me likes. I couldn’t find the referenced post, but I was able to find the plist anyway at

The fix was simple: Change the ProductBuildVersion to be 11C74 (or the most current non-beta build of OS X), restart Xcode, and rebuild your project. To verify your change, open About This Mac: 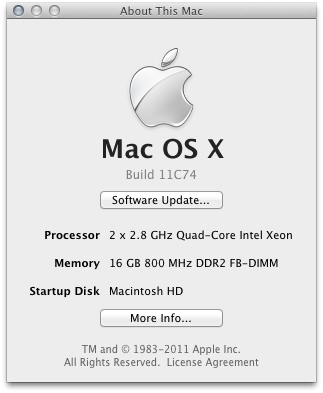 Don’t forget to change it back right after you upload. I would not advise restarting your computer or doing anything else. I don’t know what else this could affect.

You can Archive and Submit from Xcode now and you won’t be held up by the error:

This bundle is invalid. Apple is not currently accepting applications built with this version of the OS.